Rates in Canada, Chile, Estonia, Finland and Ireland are also well above the international average.

The Building the Future: Children and the Sustainable Development Goals in Rich Countries report measured the rate of suicide in adolescents across 41 OECD and EU countries.

It found almost one in five (19.8%) children in New Zealand are living in relative income poverty, and that the nation has the sixth-highest teen birth rate (Mexico was first).

“It is important we don’t just look at our shocking youth suicide rate, and realise that the children who are having suicidal thoughts are likely the same children who are living under the poverty line and with food shortages,” UNICEF New Zealand’s national advocacy manager, Dr Prudence Stone, told BuzzFeed News.

“New Zealand is ranking poorly even as a high income nation because our leaders and successive governments have not been strategic, and we know that the first services to go when there is no increase in funding are mental health and public health services.

"Too many children are losing hope and giving up.”

Northland Riders Against Teen Suicide (RATS) is one group trying to raise awareness through motorbike rides and by encouraging those in their community to talk about suicide.

The group's chairman Hone Mihaka has lost friends and family members to suicide and tried to take his own life as a younger man.

"I grew up as a victim of domestic violence and abuse and was also abused by state childcare, and eventually I became a perpetrator of that very same abuse to my own partner," the Bay of Islands man told BuzzFeed News.

"One night, after having beat up my family so much, I thought it would be better for their wellbeing if I killed myself."

Mihaka's attempt was unsuccessful and he said after rebuilding his life and working in communities dealing with domestic violence, he turned his attention to the high adolescent suicide rate.

"New Zealand should be ashamed of itself," he said. "We are too afraid to talk about it – that silence is the greatest friend that suicide has."

New Zealand's Mental Health Foundation program director Moira Clunie told BuzzFeed News that Maori youth were at the highest risk of suicide, as well as LGBTI children and those living in poverty.

"[New Zealand] also has one of the highest rates of school bullying, as well as high rates of family violence," Clunie said.

"We also know from the data on those who have died, that those children who have had a connection with social welfare systems are more at risk.

"But know that young people who are more connected with their family and culture, and who are accepted and celebrated for who they, are are less likely to die by suicide or have suicidal thoughts."

The UNICEF report found adolescent boys in the countries surveyed were three times more likely to die by suicide than adolescent girls, but that girls were found to actually attempt suicide twice as often.

The adolescent suicide rate was lowest - 1.7 per 100,000 - in Portugal, and tended to be lowest in southern European countries.

Adolescent suicide rates have fallen in the majority of countries in recent years. The biggest improvements were in two of the nations with the highest suicide rates, Chile and Lithuania. 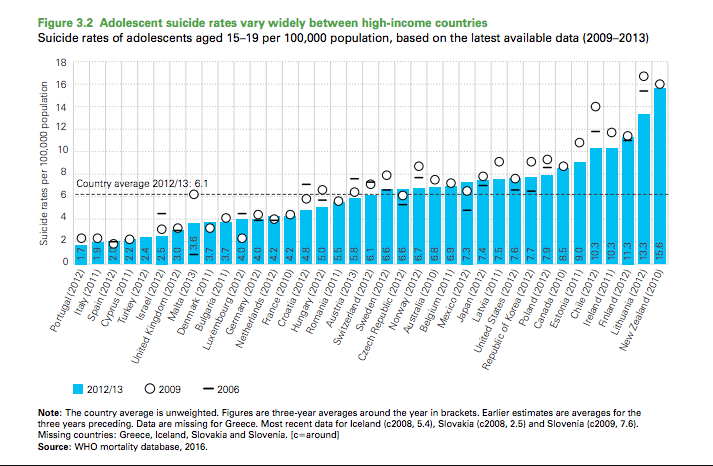 Broadcast only pages with modules or page types that are consistent with the purpose of this page, e.g. it might accept any types or be set for one type only, e.g. Events.

+ Text Size -
Do NOT follow this link or you will be banned from the site! Original generation time 1.8721 seconds.